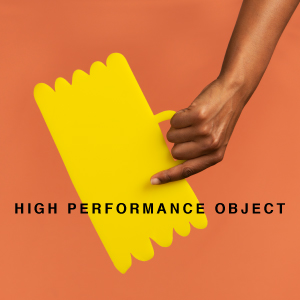 A collaborative work by Shizen Jambor and Theo Terry.

High Performance Object is a collaborative exhibition by Shizen Jambor and Theo Terry. Combining the glossy and colourful seduction of commercial photography with sculptural elements, Jambor and Terry explore the intersection of camp, kitsch, and luxury through compositions that offer both a baroque sensibility and satirically crude execution. The relationship between the hands and the objects they hold is ambiguous – it is unclear which is performer and which is accessory.

Shizen Jambor is an artist of Chinese-Thai and white settler descent based in Vancouver. Her work spans video, sculpture, and installation and satirizes mythologies around identity construction and art production. She employs theatrics, humour, and visual metaphor to parody and complicate the performance of identity under the influence of social, cultural, and economic capital. Jambor holds a BFA in visual arts from Emily Carr University.

Theo Terry is a Vancouver-based visual artist. His work centers around the photographic recontextualization of everyday objects, informed by historical still life painting, commercial photography, collage, and the aesthetics of digital processes. He received a BFA in photography from Emily Carr University in 2018.