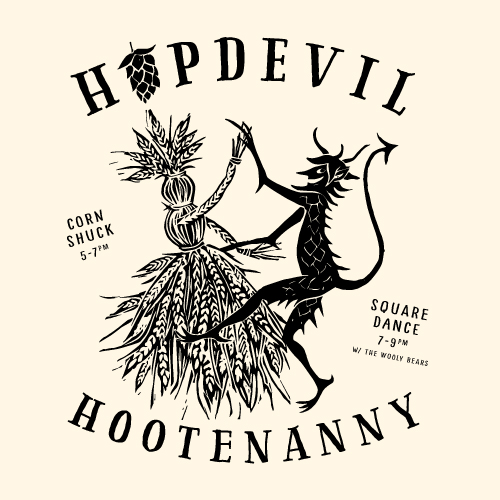 Grab your partner and come on down to Strange Fellows Brewing on Saturday September 23rd, for our first ever Hop Devil Hootenany – a Brewer’s harvest celebration and community dance. Families welcome.

Inspired by both the Belgian Hopduvel and the British Corn Mother traditions, our Hop Devil Hootenanny celebrates the harvests that mean the most to us – hops and barley. To ensure a successful harvest for the next year, Belgian hop farmers would parade and then burn effigies of the “Hopduvel” – the personification of a storm that could destroy the hops before they were harvested. Pagan Europeans believed that the spirit of the grain lived amongst the crops and would be made homeless upon harvest, so they wove decorative shapes from the last sheaves of harvested grain for the spirit to inhabit over the winter. After spending the winter upon the warm hearth the “Corn Mothers” would be plowed back into the ground come Spring

Put on your dancing shoes, and bring your friends and family for a festive harvest celebration, with FREE corn on the cob (lots of corn on the cob!), beer (including a reserve of Amarillo Cyclops IPA) and music and dancing courtesy of the Wooly Bears, all presided over by the Hop Devil himself. Make your own Corn Mother with help from the folks from Cedar Isle Farm, and be sure to share your wish with the Hop Devil before his firey demise (more on that later).

Corn Shuck 5pm until the corn runs out