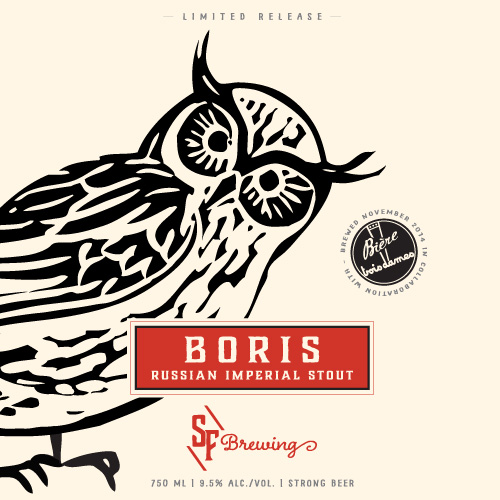 We are happy to announce the release of BORIS – the first of our barrel-aged beers. Brewed in November 2014 in collaboration with Switzerland’s Brasserie Trois Dames, this Russian Imperial Stout was one of our very first brews and has aged in bourbon barrels ever since, developing a complex leathery, rich and round character.

Swift & silent, Owl glides through the dark, his ominous screech believed to portend death & misfortune. Some revere him as a messenger of the spirit world, an oracle of secret knowledge. Inspired by Owl’s omniscience, this barrel-aged stout penetrates the inky darkness of the soul, illuminating unseen truths.

750ml bottles available at the Brewery as of March 16th, as well as at select private liquor stores around town beginning March 21st. We will tap our one-and-only keg of this precious stuff on the evening of March 16th 6-8pm. 5oz tasters $4 (limit 1 per customer).

Alongside BORIS, we will also release “Imperial Matsqui” – a Mt. Lehman Cheese Co. and Strange Fellows Brewing collaboration cheese. Imperial Matsqui is a hand made, old world style goat cheddar, aged 6 months, made with BORIS. Available only at the brewery (limited quantity).